Who should (be allowed to) create new teams? IT, helpdesk, everyone?

Microsoft Teams is a platform for chat, video and apps, but most importantly it is a collaboration tool for organizational teams. Yet, there is one challenge that companies and organizations will encounter sooner or later: Who actually gets to create new teams? 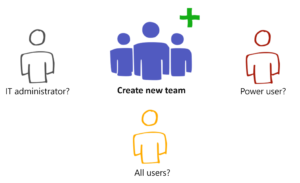 There are several IT or user groups to consider. Which group is best suited? In this article, we want to get to the bottom of this question, as well as present best practice approaches and complete solutions.

Best practice: Creating new teams – how and who?

We take a look at what practical findings there are and who should create a new team. But before that, a look into the perfect world of theory – how you should do it.

The theory of Microsoft

Before the team is created, it should be clarified whether the team is needed at all. Microsoft formulates best practices in the article “Best Practices” this way: “Before creating a team, think about the goal, project, or work items and who in your organization can help deliver it collaboratively.” (as of 11/27/20)

Only if agreed in organizational terms and deemed useful, a new team with a purpose and a group of people will be created.

In summary, the following procedure is recommended for creating new teams:

Microsoft describes other scenarios for special teams and also recommends familiarizing yourself in advance with the elements of channels, teams, chats and how they are differentiated.

How teams are created in practice in organizations

When Microsoft Teams is introduced in an organization, one often encounters two approaches:

“We want to take advantage of the Microsoft Teams opportunity”-strategy 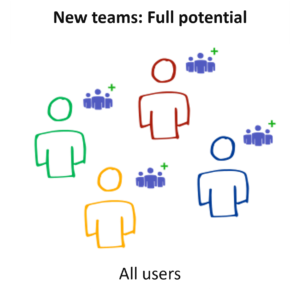 In the first case, IT and management want to quickly exploit the potential of Microsoft Teams. This is mostly for rational reasons, such as home office in Corona times, but no alternative technology is yet available. This approach is more often found in pragmatically managed companies that want to move quickly.

The advantage is obvious: Everyone can get started immediately.

The disadvantages only reveal themselves over time: if everyone can create a team, they will. At least to have tried it once, because the application is new for the organization, the departments and each individual user. Recapturing this becomes more difficult the larger and more active the organization. If files are shared freely, the situation can become a security issue.

In the second case, security and IT governance are often strong players. Especially companies with sensitive data or that have had bad experiences with spontaneous rollouts tend to go this way. An introduction is delayed in order to avoid security problems.

The advantage: The company has control and a steady and orderly usage.

The disadvantages: MS Teams was made for users. If they get limited functionality, all other tasks have to be done by experts. This means that to simply “create a team” users have to contact their IT admin or helpdesk. At the same time, there are multiple tasks involved: a support ticket or call, waiting time, involvement of a second person to do the task, closing the ticket, etc.

Who creates teams in Microsoft Teams, or should do it?

Based on the considerations above, it should be added what is technically possible.

There are two authorizations:

With Microsoft’s standard tools, this is where it ends. What is possible, however, is to allow certain user groups (e.g. helpdesk or power users) to create teams.

Here are three examples that illustrate the advantages and disadvantages when creating new teams:

All users are allowed to create new teams

From our point of view, users are the right target audience, especially for the creation of teams. Microsoft themselves write: “We suggest you start with a “Get to know Teams” team where your early adopters can play around, ask questions, and discover the capabilities of Teams.” (as of 11/27/20)

We wondered if the disadvantages can be compensated for, so that your users create controlled teams. You can use my-IAM TeamSpace to configure security features or restrict only certain user groups from creating “open” teams. When creating teams, you define which user type is allowed to become a member.

IT admins or helpdesk only are allowed to create new teams 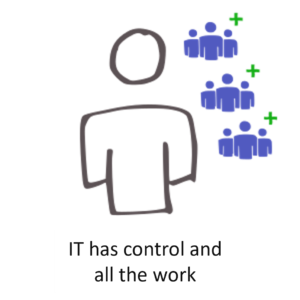 A second option would be to delegate the creation of new teams to the IT administration or the helpdesk. This undoubtedly achieves a high degree of security and control, and IT retains an overview as far as possible. However, this approach involves risks and takes away opportunities, which should not be underestimated. After all, Microsoft Teams lives and grows from the participation and interaction of employees. If you put a stop to this movement, the use of the application will also suffer.

Disadvantages can barely be reduced because the standard tools for team administration are limited. The granular administration of teams is time-consuming and delegation is hardly possible.

TeamSpace, the my-IAM platform, offers a user- and company-friendly solution without impeding the employee’s workflow. There is no additional burden on IT. Employees can create new teams themselves with security- and compliance-enabled templates. With a consistent configuration via TeamSpace, new teams are created according to corporate standards. In addition, rapid growth of new teams is avoided. 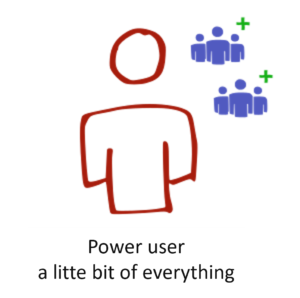 A third way would also be feasible, which would involve a group of power users. These users are authorized to carry out the creation of the teams. They usually have a broad understanding of IT, but work outside the IT department.

This option is a combination of administrators and users. That is how it also turns out with the advantages and disadvantages. There are now more contacts who can create teams. However, it is not possible to distinguish whether the team contains protected data or not. Naming conventions apply globally to all teams. Power users cannot create application-specific teams any more than normal employees.

An alternative is offered here by my-IAM TeamSpace. All employees can use Teams in such a way that it creates added value in everyday life – because project, department or security teams function differently.

Microsoft sums it up: the most important thing when creating teams is to consider whether a team is necessary and makes sense, otherwise it will be chaotic.

Who should do it now? Companies have two options to choose from with Microsoft Teams: (1) enable all employees to create new teams, or (2) only have a controlling entity, such as the IT department, create teams. Microsoft is leaning towards the users.

Both ways bring advantages and disadvantages. In the first case, exponential growth of teams can lead to chaos, in the second case, severe limitation can affect the use of the application.

Our answer: Employees should be able to create new teams within a given framework of compliance and security.

my-IAM Teamspace extends the technical standard tools provided by Microsoft with user-friendly security templates for the creation of teams. These allow each employee to create new teams within a defined framework. As a result, employees remain motivated to work with Teams. Hidden control mechanisms ensure that the new teams make sense and improve collaboration.

What kind of teams exist?

When creating a new team, the owner must decide what[...]

Microsoft Outlook or Teams – the differences

With the introduction of Microsoft Teams, a change is taking[...] 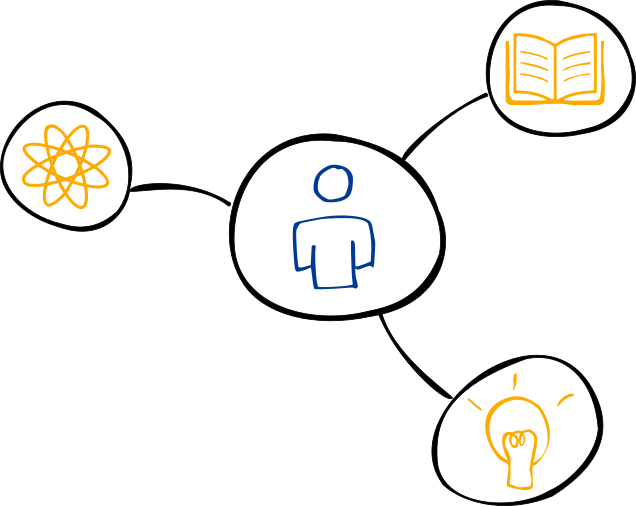